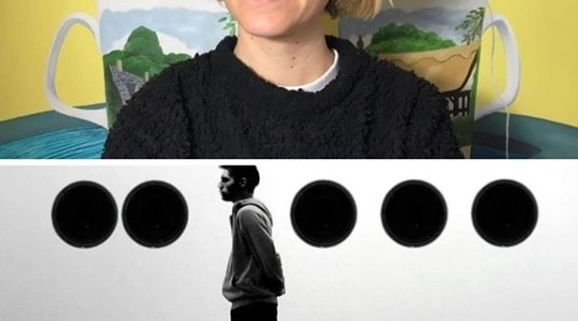 Andrea Abbatangelo and Camille Beauplan: they are the two winners of the artistic stays at the center of GemellArte, an independent art festival that will simultaneously take place in Terni and Saint Ouen in May, with the aim of enhancing the close twinning between the two cities from 1962 through the sharing of their respective cultural heritages and their emerging talents.

From 7 to 17 May, Andrea Abbatangelo – who has already exhibited in major international events, such as the Documenta in Kassel and in museums such as the Cabaret Voltaire in Zurich for Manifesta 11, the Mambo in Bologna, and is about to arrive at the Tate Modern of London – will be at the Mariton Gallery in Saint Ouen to carry out the in situ project, specifically designed for the city next to Paris, entitled ‘Public path’. With the aim of inviting people to establish a widespread public contemporary art collection; among the courtyards and in the trunks of cars. On the same dates, Camille Beauplan will work at the Caos in Terni to explore the concept of twinning and update the long connection between the two cities, highlighting the deep changes that have taken place over the years.

The winners of the stays were chosen among five artists for each city, selected by the evaluation commissions among the candidates for the call launched by the Gemellarte festival.

THE EXHIBITIONS AND THE FESTIVAL
The first stage of the festival, supported by the French Embassy in Italy, will culminate with the simultaneous exhibition of the projects created by the two artists interacting with the area and its inhabitants, or taking inspiration from them. The works produced during the stay will remain in the cities that hosted the artists and will be on show from May, the 17th, the day on which the actual festival will start.
Three days of celebration, until May, the 19th, under the connection between Italy and France, in which Terni and Saint Ouen will be united through the exhibition of the works created in the stay and a series of appointments between book presentations, concerts and DJ sets, happy hours and brunches with the artist, art films, theater readings, creative workshops, initiatives for schools and themed events throughout the city.
Details, with prominent names in the national cultural scene, will be revealed in the coming weeks.

THE ARTISTS
These are the biographies of the two emerging artists chosen by the evaluation committees of Terni and Saint Ouen.
Andrea Abbatangelo – The artist from Terni, born on 15 July 1981, lives and works in London. “Since the first series of works (2004-2007), I work on the themes of the conflict between Modernity and Tradition, between the South and the North of the World and on the violence of late capitalism”, he says. “In recent years, I have presented my works in some crucial contexts for the history of our continent; in 2012 in Kassel, for Documenta 13 a performative work on austerity and political and social drift and in 2016 at the Cabaret Voltaire in Zurich (known for being the place where the Dada movement was born) for Manifesta 11 a work on the reaffirmation of nationalisms and violence; also Ulay (Marina Abramovic’s historical partner) was in the same section. In 2018, I attended a project dedicated to Tehching Hsieh and I presented a contribution to the Mambo of Bologna on ethics in the art system. Since 2015, I work at Project RadioLondon, working in Africa and Northern Europe; the project will be presented soon at the Tate Modern in London and in other museums”. The link to his website is: http://andreaabbatangelo.com
Camille Beauplan – Born in 1984, Camille Beauplan graduated at the Bordeaux School of Fine Arts and obtained a Master’s degree in Aesthetics of Art. Together with her research, she also obtained the Capes – Certificate of qualification for secondary education in applied arts. In her years of study, she dedicated herself to painting, representing mass cultural products diverted from their original use in scenes inspired by Pop Art, kitsch aesthetics and science fiction. Today, she prefers to use natural or technical objects found in her environment to create studies that can take various forms: drawings, sculptures, installations, videos, halfway between Arte Povera and Romanticism, sublimating the plastic properties of common or poor materials, and their almost ritual aspect suggests a relationship with the world soacked of mysticism. In 2018, she exhibited at the Assaut de la Menuiserie in Saint-Etienne, at the Galerie Plateforme in Paris and set up a personal exhibition in Paris’s Openbach, at the Galerie 5un7 in Bordeaux. The link to her website is: http://camillebeauplan.com

REASONS OF THE COMMISSIONS
The curators Chiara Ronchini, artistic director of the Gemellarte festival and founder of the Crac Arte Contemporanea gallery in Terni, and Tiziana Zumbo Vital, art historian and councilor for heritage and equal opportunities of the City of Saint Ouen, talk about the reasons for choosing the two artists.
“We think that Camille Beauplan can develop an interesting project on our area, starting from particularly original intentions. We are curious to see how this young artist will be able to develop such a complex theme through painting, being inspired by our city!”, Ronchini says.
“The choice wasn’t easy – Zumbo says – The maturity and quality of Abbatangelo’s works, the depth of his artistic research, which has already had several international awards, convinced us. His artist message is very clear”.

STAY PROJECTS
Andrea Abbatangelo for Saint Ouen – Abbatangelo’s project, entitled Public path, will be based on the simple intention of bringing the museum institution, in this case the Galerie Mariton, with the inhabitants of St Ouen together, representing the institution’s reference community in question. In other words, the artist explains, “the artistic process is aimed at expanding the Museum even in the private spaces of citizens: inviting people to establish a collection of spreaded contemporary public art; whether it is a courtyard, a garage, the trunk of a car etc. The value of this action is based on the link between the people of the community and the role of artistic institution. The key word is ‘trust’, the strongest and most self-generating bond within a community and it is precisely the value that unfortunately suffered a crisis after the Great Recession of 2009 and that can be rebuilt. The success of the project is based on the involvement of the inhabitants, so I will first have to study the history and dynamics of the St Ouen’s districts, as well as the personal, social and cultural characteristics of reference. Public path is based on a very simple principle: each member of the community offers his own contribution according to his own sensitivity and skills. During the stay there will be moments of exchange and interaction (public workshops, shows, dinners etc) with moments of individual work, up to the presentation of the final project between Galerie Mariton and the other designed places”.
Camille Beauplan for Terni – The French artist tells the path that brought her closer to Gemellarte and to think of a project for Terni. “Two years ago I decided to stop teaching to resume my artistic production. I started a research cycle on the city where I live and work for six years, Saint-Ouen-sur-Seine. Every time it is about to paint the situations that build the identity of a place and its inhabitants. The point of view is subjective. The imbalance, the paradox, the clumsiness, the freak, the absurd are the subjects that interest me as they contribute to make us human. In addition to the subject, I also question the use and history of painting, as it is also about our creativity. Saint-Ouen-sur-Seine is a perfect city for the development of my research. It is a city that has undergone an impressive number of changes over the course of its history and its present is no exception. In fact, in our age its change is happening at an impressive speed. I have the opportunity to witness this event. Having the opportunity to stay in Terni will allow me to propose a portrait of what twinning means today and to raise a pictorial and philosophical question that I have never had the opportunity to raise: how to represent the twinning of these two different places? It is a joy to be able to explore this research”.

EVALUATION COMMISSIONS
The artists have been selected by two commissions, which can include important personalities from the world of culture and art, as well as institutional referents of the two cities that are protagonists of the festival.
On the French side: Paola Bassani, art historian and daughter of the writer Giorgio Bassani (author of the novel “Il giardino dei Finzi Contini”, as well as founder and then president of Italia Nostra from 1965 to 1980); Yves Le Gros, director of the École de beaux arts; the painter Katrine Frederix, the councilors of the Municipality of Saint Ouen Brigitte Zucchiatti (Culture) and Tiziana Zumbo Vital (Heritage), curator of the exhibition at the Mariton gallery.
On the Italian side: Fabrizio Borelli, independent photographer, cameraman, director of photography, director and designer of the format; Linda Di Pietro, president of Rena (www.progetto-rena.it) and sole director of Indisciplinarte Srl, a company that deals with cultural planning and territorial development, and she coordinates the programming and services of the Caos – Centro arti opifici Siri; Chiara Ronchini, curator and founder of the Crac Arte Contemporanea gallery in Terni; Alessandra D’Egidio, Head of Cultural Services – Higher Education – Office of Youth Policies of the Municipality of Terni; the deputy mayor and councilor for culture of Terni, Andrea Giuli.

THE GEMELLARTE PROJECT
The independent festival of contemporary art Gemellarte aims to create a “bridge” between the already twinned Italian and foreign cities, promoting cultural exchange, sharing art and their respective heritages, researching and promoting new talents, as well as the rediscovery of the sense of citizenship and of its own area, breaking down all the borders.
GemellArte, it is clear, is proposed as an initiative of a strongly civic cultural nature.
Due to this dual nature and coherently with its aims, it is an understatement to limit the project to two countries (Italy and France), but it can be extended to more states, Europeans and not only, starting from the already “active” twinnings, although poorly supported by concrete and targeted initiatives, which go beyond the normal political or institutional dynamics.
With the further target of enhancing the city’s suburbs, increasingly marginalized in the complex development of cities, and the creation of an artistic and cultural path that could find (and offer) an outburst also in terms of tourism development

Per chiudere in (estrema) bellezza #GemellArte2021